Svante Pääbo is a 2017 NOMIS awardee and has been director of the Department of Evolutionary Genetics at the Max Planck Institute for Evolutionary Anthropology (Leipzig, Germany) since 1997.

Pääbo was born in Stockholm, Sweden. He earned his PhD from Uppsala University, Sweden, in 1986 and did postdoctoral research at the Department of Biochemistry at the University of California at Berkeley, US. He has received numerous honors and awards, including the Gottfried Wilhelm Leibniz Prize as well as the Theodor Bücher Medal and the 2018 Princess of Asturias Award, among others. Pääbo became professor of general biology at the University of Munich, Germany, in 1990.

One of the founders of paleogenetics, Pääbo is investigating the factors that set humans apart from other organisms. He determined high-quality genome sequences from Neandertals, the closest evolutionary relatives of present-day humans, enabling him to identify genetic changes in the human genome that all or almost all present-day humans share, and that set humans apart from Neandertals as well as chimpanzees and other apes. These genetic differences constitute an essentially complete “genetic recipe” for being a modern human. His project, A Cell and Molecular Approach to Research into the Biological Basis of the Human Condition, is analyzing these genetic differences and identifying those that have functional consequences — in particular with respect to the cognitive and social abilities that have made possible the development of rapidly changing technology, large societies, art and perhaps modern language. In 2018, Pääbo discovered that interbreeding occurred between Neandertals and Denisovans, an ancient human species. The discovery was made from a fragment of a long bone identified as coming from a 13-year-old girl nicknamed “Denny,” who lived about 90,000 years ago: She was the daughter of a Neanderthal mother and Denisovan father. 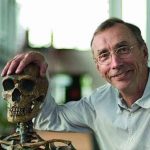