Philipp Ekardt is a NOMIS Fellow at eikones – Center for the Theory and History of Images at the University of Basel (Switzerland) and a visiting professor at the Berlin University of the Arts (Germany).

Born in Germany, Ekardt studied comparative literature and art history with an additional focus on film theory and aesthetics, receiving a joint MA from the Freie Universität Berlin and Humboldt-Universität zu Berlin. He received a PhD from Yale University (New Haven, US). Ekardt has held teaching and research positions at the Freie Universität Berlin’s Peter Szondi-Institute for Comparative Literature and in the research cluster Languages of Emotion, and as a member of the Bilderfahrzeuge-group at the University of London’s Warburg Institute. He has also taught and advised theses in smaller capacities at the Bard Center for Curatorial Studies, at University College London’s Department of Classics and at eikones. He has been a fellow at the German Forum for Art History in Paris (2012-2013) and eikones (2014, 2016). His monograph Toward Fewer Images: The Work of Alexander Kluge (MIT Press, 2018) is the first study to account for the wide-ranging œuvre of this director (founding figure of New German Cinema), television producer, digital entrepreneur, author and intellectual across the entire spectrum of his many media. Ekardt’s second monograph — due to be published with Bloomsbury Academic in late 2019 — uncovers the fashion-historical and general discursive contexts that frame Walter Benjamin’s fashion theory, as articulated in the German-Jewish thinkers Passagenwerk (Arcades Project).

During his NOMIS fellowship, Ekardt is working on a revision of our understanding of how the aesthetics of gestures and the production of images are presented around 1800, centrally in the representation of tableaux vivant in Goethe’s novel Wahlverwandtschaften (Elective Affinities) and in the attitudes of Lady Hamilton. Rather than adhering to a principle of kinetic arrests, he argues, these practices operate according to a compositional principle, in which otherwise circulating elements are momentarily suspended and arranged into material assemblages. 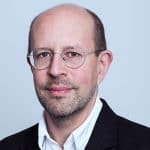 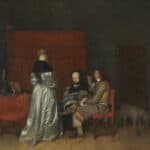