Alwin Köhler is scientific director of the Max Perutz Labs Vienna and professor of mechanistic cell biology. He is leading the Tardinomis –Decrypting Cryptobiosis project.

Born in Transylvania, Romania, he studied medicine and music in Würzburg, Germany, and performed his doctoral work at Harvard Medical School, where he was trained in biochemistry. Following a pediatric residency and postdoctoral work in Heidelberg, Köhler became a junior group leader at the Max Perutz Labs in Vienna in 2010 and in 2018 was appointed professor of mechanistic cell biology. He received the 2003 Young Investigator Award of the Medical Faculty at Heidelberg University, an ERC Starting Grant in 2011, the START Award of the Austrian Science Fund in 2011 and an ERC Consolidator Grant in 2017. He is a member of the Austrian Academy of Sciences (Young Academy).

Köhler’s research focuses on the nuclear envelope, a signature element of all eukaryotes. It separates nucleoplasm from cytoplasm and serves as the protective vessel for the genome. The nuclear envelope combines disparate features: durability with plasticity, selective traffic with mass transport, spatial enclosure with sophisticated signaling. In doing so, it enables cells to protect, decode and regulate their genome. How a single “intelligent boundary” can achieve this multitude of functions remains one of the biggest puzzles in biology. His NOMIS-funded research focuses on tardigrades, microscopic animals with an outstanding robustness to all kinds of stresses including extreme heat, dehydration and radiation. Here, he wants to understand how nuclear envelope architecture and genome integrity are preserved under conditions that no human being could survive. 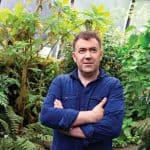