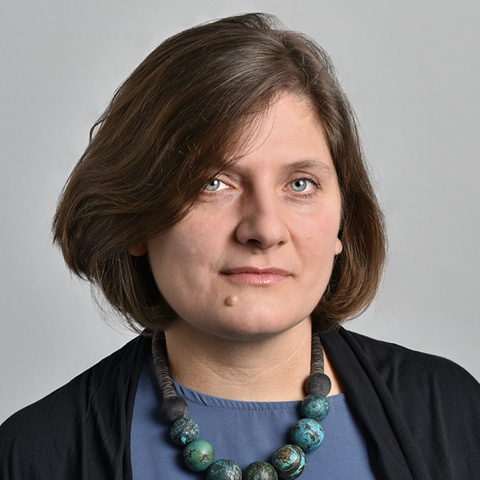 Oksana Sarkisova is a NOMIS Fellow at eikones – Center for the Theory and History of Images at the University of Basel (Switzerland) and faculty member of Blinken OSA at Central European University (Budapest, Hungary).

Sarkisova is a film and cultural historian with a deep interest in visual studies. Her research is in the fields of memory and visual representation, history of nonfiction cinema, and amateur film and photography. She completed her PhD in history at Central European University in 2005. Her publications include Screening Soviet Nationalities: Kulturfilms from the Far North to Central Asia (2017), a coedited volume Past for the Eyes: East European Representations of Communism in Cinema and Museums after 1989 (2008), as well as a wide range of articles, essays and reviews on Soviet and Russian cinema, archival and curatorial practices, appropriated footage in documentary practice, and amateur photography. As a faculty member of Blinken OSA Archivum at Central European University, she teaches courses on visual theory and practice, memory politics and film, documentary cinema and human rights, and filmmaking for historians. She is cofounder and director of Verzio International Human Rights Documentary Film Festival (verzio.org) and co-founder of CEU Visual Studies Platform (vsp.ceu.edu). She designed and directed the CEU Summer University programs “Documentary Cinema in the Digital Century” (2013), “Screened Memories: Historical Narratives and Contemporary Visual Culture” (2016), and “Fields of Vision: Memory, Identity, and Images of the Past” (2019), and participated as a tutor in multiple workshops including Cinema Without Borders, Caucadoc, and Summer School on Cinema and Human Rights (Galway).

As a NOMIS Fellow, Sarkisova is working on the project “The Private Touch: Domestic Visual Archives and the Return of Aura,” which investigates multiple forms of interaction with vernacular photography, from domestic archiving and performative practices to the multiple forms of public displays and documentary films built with amateur still and moving imagery. Her research focuses primarily on the representation and memories of the Soviet 20th century, with a special focus on post-Soviet memory politics in a comparative perspective. Visual transparency and instinctive familiarity as well as a powerful haptic, material dimension of vernacular photographic images make them important resources for the memory politics in a national and international context. She is completing final chapters within a collaborative project with Olga Shevchenko for a coauthored manuscript tentatively titled “Snapshot Histories: The Afterlives of Soviet-era Domestic Photography.”