Oliver Mühlemann is professor of biochemistry at the University of Bern (Switzerland) and the director of the Swiss National Science Foundation National Center of Competence in Research (SNSF-NCCR) RNA & Disease. He is co-leading the project Structure and Function of the Human Ribonucleosome.

Mühlemann grew up near Solothurn, Switzerland. He graduated with an MS in molecular biology and microbiology from the University of Bern (Switzerland) in 1992 and received his PhD from Uppsala University (Sweden) in 1997. He was a postdoctoral fellow at Brandeis University (Boston, Massachusetts, US) and returned to the University of Bern to start his own independent research group as a junior group leader in 2000 (with support from the SNSF), before being appointed professor of biochemistry in the Department of Chemistry, Biochemistry and Pharmaceutical Sciences in 2010. Mühlemann received fellowships from the SNSF, the Friends of Switzerland Boston and the Max Cloëtta Foundation, and was awarded a starting grant of the European Research Council in 2008. In addition to directing the NCCR RNA & Disease, which he initiated together with Frédéric Allain, Mühlemann has been a member of the SNSF Research Council (Division Biology and Medicine) since 2018.

Mühlemann’s research interests include understanding posttranscriptional mechanisms of gene expression in mammalian cells. Early in his career, he performed pioneering investigations into the roles of SR proteins in the regulation of splicing. More recently, his laboratory has become internationally recognized for its work on elucidating the mechanism of nonsense-mediated mRNA decay (NMD) and its biological roles in gene regulation. His laboratory also determined important functions of the hnRNP protein FUS-TLS in amyotrophic lateral sclerosis and pre-mRNA splicing, collaborating with the Allain lab on determining the structure of FUS-TLS bound to RNA. Mühlemann and his team are currently investigating the biochemical purification of macromolecular complexes and their functional characterization using state-of-the-art sequencing and proteomics techniques. 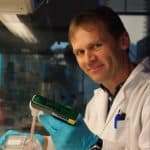