Architectural history has traditionally centered on the visual to understand buildings, thereby omitting other realms in which buildings partake, mystifying the relation between technology and domestic labor and marginalizing a range of people who contributed to the creation and functioning of architecture. A novel history of modern architecture thus cannot be grounded in this established visual approach.

The project Beyond the Visual: Toward an Inclusive Architectural History is developing an architectural history that focuses on the nonvisual realm of the 20th century domestic interior in Europe and the US. It is examining this realm by attending to the interior’s material and technological aspects, and the way they are registered by people’s perception: the sensations of sound, touch, smell, warmth, cold, humidity levels, the freshness and stuffiness of air, as well as the experience of movement, comfort and fatigue. The sensations are either nonvisual or have a visual component, like touch or movement that can be seen, but their visibility is nonessential for them. The project is advancing the idea that the nonvisual, although insufficiently acknowledged, is foundational for our experience of the architectural interior. It intentionally eschews the tradition of conceptualizing the architectural interior as mainly the pictorial, image-like, an object of visual contemplation.

The researchers are emphasizing the management of the beyond-the-visual sensations in everyday domestic life. This management involves an array of purposeful activities, especially labor, engaging people, space, objects, materials, technology and the invisible infrastructure embedded in the building. Beyond the Visual will demonstrate how this management founds and sustains the interior, differentiates between uses and statuses of various areas of the home and accommodates some users—or some elements of their lives—while disregarding others due to factors such as physical disability, gender or lower sociocultural status. Among the main questions the project seeks to answer are: How does the management of nonvisual sensations establish the interior? How does this management influence users and vice versa? What are the effects of this interaction at the practical and sociocultural levels?

Advancing the understudied area of architectural history, Beyond the Visual will generate a new model of architectural analysis, offering an account of the domestic interior as it was experienced by a variety of users. In doing so, it will develop a more inclusive understanding of the architectural user and dweller, acknowledging a wider range of stakeholders partaking in the history of buildings. Addressing the beyond-the-visual perception of the material and technological, along with broader cultural issues—all in the context of the interior—the project is steering architectural history away from art history and its visual bias, toward the social sciences such as psychology, sociology and anthropology. 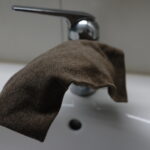