Three new large-scale, multidisciplinary research teams have just been assembled to answer questions related to the aging brain and Alzheimer’s disease. Today, the American Heart Association, the world’s leading voluntary organization focused on heart and brain health, and the Paul G. Allen Frontiers Group, a division of the Allen Institute, announced awardees of the American Heart Association-Allen Initiative in Brain Health and Cognitive Impairment, a new collaborative funding initiative launched earlier this year. The teams, which include NOMIS Distinguished Scientist Awardee Tony Wyss-Coray and Rusty Gage of the Salk Institute, a NOMIS partner, will combine research of the brain and the blood vessels to develop a new understanding of — and ultimately better preventions and treatments for — age-related brain disorders such as Alzheimer’s disease. 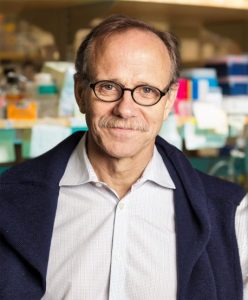 The three teams, headquartered at the Salk Institute for Biological Studies in La Jolla, CA, Stanford University School of Medicine in Stanford, CA and University Hospitals Cleveland Medical Center in Cleveland, OH, respectively, will work to develop new solutions to the urgent problem of age-related cognitive decline. As people live longer in many parts of the world, Alzheimer’s and other age-related dementias are on the rise, projected to reach more than 75 million people worldwide by 2030. To date, no effective therapy has been developed for these disorders, which are not only deadly, but also exact a high financial and emotional toll on society.

“The questions we are asking in this project are on a frontier that’s really unknown,” said Rusty Gage, Ph.D., neuroscience researcher and president of Salk, who will lead one of the new research teams. “How do we age, and why do some people age differently? I’m hopeful that we will reach a coherent answer to that question. We’re all going to age, and through our work we want to provide a map for healthy aging.”

Gage will lead an interdisciplinary group of professors at Salk that believe that Alzheimer’s disease and other age-related brain disorders are triggered not by a single event, but by a failure of complex interwoven biological systems in our body that start to break down as we age.

Wyss-Coray will lead a research team on a four-year project to unlock the biological secrets of youth and rejuvenation in young blood. They will search for the damaging proteins and molecules that accumulate in blood with aging, obesity and vascular disease, with the goal to neutralize these factors and protect against age-related diseases. The research team hopes to ultimately figure out how to mimic the beneficial effects of young blood to create new therapeutics for vascular dementia, Alzheimer’s disease and other aging-related brain disorders.

Salk awarded $19.2 million by the American Heart Association-Allen Initiative to study Alzheimer’s and aging in the brain