Salk Institute researcher Janelle Ayres and her colleagues report that giving mice dietary iron supplements enabled them to survive a normally lethal bacterial infection and resulted in later generations of those bacteria being less virulent. The approach, which appears in the journal Cell on August 9, 2018, demonstrates in preclinical studies that non-antibiotic-based strategies — such as nutritional interventions — can shift the relationship between the patient and pathogens away from antagonism and toward cooperation. 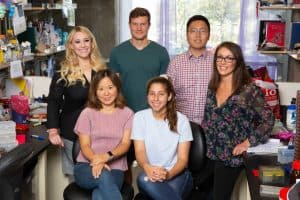 Ayres, a pioneer in researching the interactions between microbes and their hosts, is finding increasing evidence that in addition to our immune system, which kills pathogens, we have what she calls the cooperative defense system, which promotes health during host-microbe interactions. For example, in 2017 her team discovered that Salmonella bacteria can overcome a host’s natural aversion to food when sick, which results in more nutrients for the bacteria and a gentler infection for the host.

Ayres is associate professor at the NOMIS Center for Immunobiology and Microbial Pathogenesis and the Helen McLoraine Developmental Chair at the Salk Institute. Located in La Jolla, California, Salk is an independent, not-for-profit organization dedicated to basic research in the biological sciences — and is one of the foremost institutions of its kind in the world. The Salk Institute has been a NOMIS partner since 2008.

Professor in the NOMIS Center for Immunobiology and Microbial Pathogenesis, director of the Molecular and Systems Physiology Laboratory, member of the Gene Expression Laboratory, and Helen McLoraine Developmental Chair