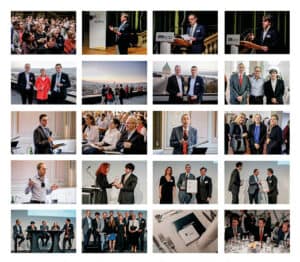 Recognizing not only scientific excellence, but also celebrating researchers who push for unconventional paths and show exceptional engagement in insight-driven research and collaboration, the NOMIS Distinguished Scientist Award 2017 was presented to Karl Deisseroth, Tony Wyss-Coray, and Svante Pääbo on Thursday, Oct. 19, 2017 at the Gottlieb-Duttweiler-Institute (GDI) in Rüschlikon, Switzerland. Founded on the principle that the facility should be a place for reflection on socially significant ideas, the GDI served as the perfect venue.

With over 100 guests, among them top scientists and scholars, representatives of world-renowned research institutes, and a number of research funders from both Switzerland and Germany, the ceremony was a culmination of acknowledging not only the relevance of basic research but also the importance of a mutualistic relationship between researchers and research funders.

The award ceremony was followed by a panel discussion with Nobel Laureate and president of the Salk Institute, Elizabeth Blackburn, and the three awardees. The discussion addressed topics such as how scientists protect creativity and innate curiosity when confronted with the expectation that they must produce tangible results, how they approach risk in research, and the public perception of their science. Concluding with a networking dinner, the event showed to be a meaningful opportunity for an informed, lively and engaging exchange of ideas.

Prior to the award ceremony, the awardees presented their work at a public lecture series at ETH Zurich on Wednesday, Oct. 18 and at the University of Zurich on Thursday, Oct. 19.

Deisseroth’s lecture, “Illuminating the brain,” shed light on his groundbreaking work in neuroscience. Deisseroth is widely recognized for developing and implementing an approach to biology called optogenetics, a technique that involves the use of light to control cells in living tissue. The NOMIS Distinguished Scientist Award enables Deisseroth and his team to implement the project ‘”Circuit States: Discovering the Causal Principles Underlying Brain-wide Dynamics,” which will adapt and combine new technologies developed in Deisseroth’s lab. The awardee hopes to gain insights into the interacting functions of neurons across multiple brain areas.

A founder of paleogenetics, Svante Pääbo became best known for his pathbreaking research on the Neandertal genome. Pääbo’s lecture, “A neandertal view of human uniqueness,” described his quest to learn more about the genetic differences and functional consequences that occurred at the split between the modern human and their archaic human ancestors about half a million years ago. The NOMIS award enables Pääbo’s research on the genetic underpinnings of the human condition and thus potentially provides an additional avenue to study diseases and other conditions that affect uniquely human traits.

Tony Wyss-Coray’s lecture, “Blood proteins regulating brain function and aging,” described his investigation into the role of aging on neurodegeneration in general and Alzheimer’s disease in particular. His research has shown that the administration of young blood into old organisms has functional consequences, appearing to “rejuvenate” an aged brain. With the support of the NOMIS Distinguished Scientist Award, Wyss-Coray and his team are setting out on the quest to identify the key proteins and genes that are at the core of this rejuvenating effect, which could produce vital new insights into biological aging.